Do you have a cellphone? Or should I say how many cellphone do you have? Do you remember when you decided to buy your first cellphone and when you started relying on it or even being addicted to it? About twenty years ago, cellphones were still rare in our society and probably only businessmen were equipped with them; however, they seem to be a must for everyone now. These magical puppies have changed our lifestyle and economic activities in the modern societies, and they even boomed the economy in some developing countries. This week, let’s talk about cellphones and how they influence the world. Please read the following article before you attend the meeting:

Mobile marvels -From The Economist print edition
http://www.economist.com/printedition/d ... d=14483896
BOUNCING a great-grandchild on her knee in her house in Bukaweka, a village in eastern Uganda, Mary Wokhwale gestures at her surroundings. “My mobile phone has been my livelihood,” she says. In 2003 Ms Wokhwale was one of the first 15 women in Uganda to become “village phone” operators. Thanks to a microfinance loan, she was able to buy a basic handset and a roof-mounted antenna to ensure a reliable signal. She went into business selling phone calls to other villagers, making a small profit on each call. This enabled her to pay back her loan and buy a second phone. The income from selling phone calls subsequently enabled her to set up a business selling beer, open a music and video shop and help members of her family pay their children’s school fees. Business has dropped off somewhat in the past couple of years as mobile phones have fallen in price and many people in her village can afford their own. But Ms Wokhwale’s life has been transformed.
Ms Wokhwale prospered because being able to make and receive phone calls is so important to people that even the very poor are prepared to pay for it. In places with bad roads, unreliable postal services, few trains and parlous landlines, mobile phones can substitute for travel, allow quicker and easier access to information on prices, enable traders to reach wider markets, boost entrepreneurship and generally make it easier to do business. A study by the World Resources Institute found that as developing-world incomes rise, household spending on mobile phones grows faster than spending on energy, water or indeed anything else.
The reason why mobile phones are so valuable to people in the poor world is that they are providing access to telecommunications for the very first time, rather than just being portable adjuncts to existing fixed-line phones, as in the rich world. “For you it was incremental—here it’s revolutionary,” says Isaac Nsereko of MTN, Africa’s biggest operator. According to a recent study, adding an extra ten mobile phones per 100 people in a typical developing country boosts growth in GDP per person by 0.8 percentage points.

In 2000 the developing countries accounted for around one-quarter of the world’s 700m or so mobile phones. By the beginning of 2009 their share had grown to three-quarters of a total which by then had risen to over 4 billion (see chart 1). That does not mean that 4 billion people now have mobile phones, because many in both rich and poor countries own several handsets or subscriber-identity module (SIM) cards, the tiny chips that identify a subscriber to a mobile network. Carl-Henric Svanberg, the chief executive of Ericsson, the world’s largest maker of telecoms-network gear, reckons that the actual number of people with mobile phones is closer to 3.6 billion.
But exact numbers are hard to come by, not least because of the continued rapid growth in the global number of subscribers. In the year to March 2009 an additional 128m signed up in India, 89m in China and 96m across Africa, according to TeleGeography, a telecoms consultancy. Numbers in Indonesia, Vietnam, Brazil and Russia also grew rapidly (see chart 2). China is the world’s largest market for mobile telephony, with over 700m subscribers. India is adding the biggest number each month: 15.6m in March alone. And Africa is the region with the fastest rate of subscriber growth. With developed markets now saturated, the developing world’s rural poor will account for most of the growth in the coming years. The total will reach 6 billion by 2013, according to the GSMA, an industry group, with half of these new users in China and India alone.

All this is transforming the telecoms industry. Within just a few years its centre of gravity has shifted from the developed to the developing countries. The biggest changes are taking place in the poorest parts of the world, such as rural Uganda.
Not the usual suspects
Three trends in particular are reshaping the telecoms landscape. First, the spread of mobile phones in developing countries has been accompanied by the rise of home-grown mobile operators in China, India, Africa and the Middle East that rival or exceed the industry’s Western incumbents in size. These operators have developed new business models and industry structures that enable them to make a profit serving low-spending customers that Western firms would not bother with. Indian operators have led the way, and some aspects of the “Indian model” are now being adopted by operators in other countries, both rich and poor. This model provides new opportunities, especially for Indian operators. The spread of the Indian model could help bring mobile phones within reach of an even larger number of the world’s poor.
The second trend is the emergence of China’s two leading telecoms-equipment-makers, Huawei and ZTE, which have entered the global stage in the past five years. Initially dismissed as low-cost, low-quality producers, they now have a growing reputation for quality and innovation, prompting a shake-out among the incumbent Western equipment-makers. The most recent victim was Nortel, once Canada’s most valuable company, which went bust in January. Having long concentrated on emerging markets, Huawei and ZTE are well placed to expand their market share as subscriber numbers continue to grow and networks are upgraded from second-generation (2G) to third-generation (3G) technology, notably in China and India.
The third trend is the development of new phone-based services, beyond voice calls and basic text messages, which are now becoming feasible because mobile phones are relatively widely available. In rich countries most such services have revolved around trivial things like music downloads and mobile gaming. In poor countries data services such as mobile-phone-based agricultural advice, health care and money transfer could provide enormous economic and developmental benefits. Beyond that, mobile networks and low-cost computing devices are poised to offer the benefits of full internet access to people in the developing world in the coming years.
This special report will examine each of these three trends in turn. Each one is significant in itself but also has consequences for rich as well as poor countries. Together they could start a second wave of mobile-led economic development as powerful as that prompted by the original launch of mobile phones. Their spread in poor countries is not just reshaping the industry—it is changing the world.
Questions for discussion:

Session I:
1. Do you have any cellphone? Do you know anyone around you who does not have any cellphone? Please tell your group members why you or anyone you know who does not have any cellphone, and if it has caused any inconvenience in you or his/her life.
2. In addition to voice calls and basic text messages, what other functions and/or services are offered on a modern cellphone? If you have a cellphone, do you use any of these functions and/or services? Share them with your group members.
3. If you are a cellphone user, try to imagine that you turn off your cellphone for a month (or maybe just a week). What do you think will happen in your life? Do you think it is possible that you live without a cellphone?

Session II:
4. What are your comments after reading this article? Do you believe that cellphones will change the world? If yes, how?
5. Do you know any newly-developed technologies besides cellphones which have made a great impact on modern societies or developing countries? Provide some examples and elaborate how they influence the world.
6. In your opinion, is cellphone an evil or a blessing of our time? Do you believe that we would be better off without cellphones? Or would it be a disaster? 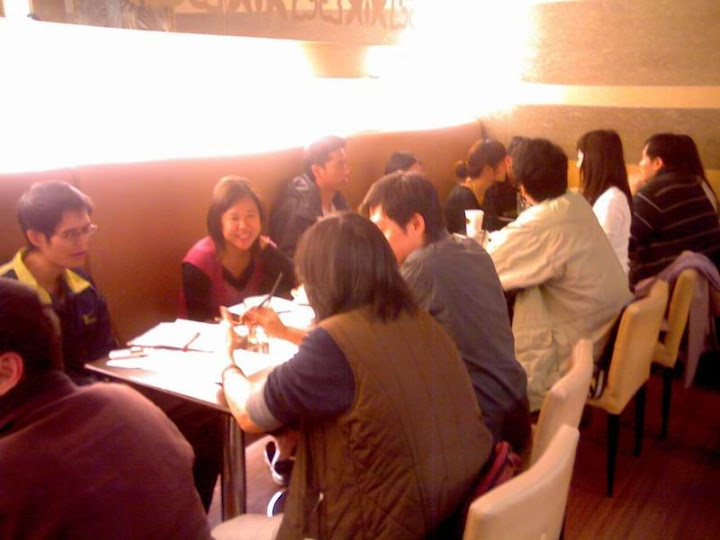 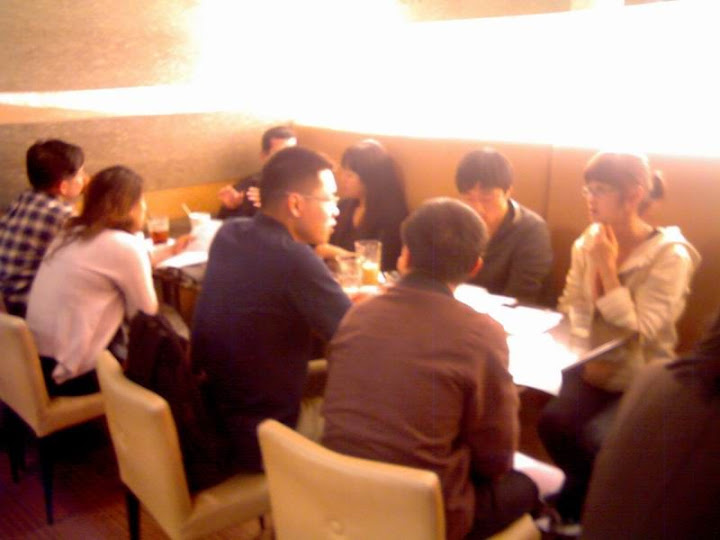 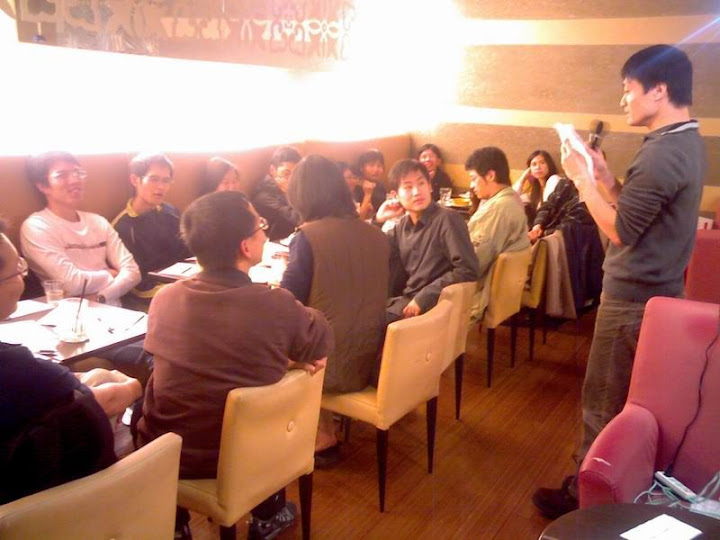 Tonight we are very happy to have Lynn, our gorgeous dentist, came back to share her experience with us. Hope she can be show up more often.

There are some information and interpitation of WiMAX for your reference, the future technologies we were talking tonight:
(Worldwide interoperabilility of Microwave Access) ..From Wikipedia

WiMAX, meaning Worldwide Interoperability for Microwave Access, is a telecommunications technology that provides fixed and fully mobile internet access. The current WiMAX revision provides up to 40 Mbps in real world end-user throughput. WiMAX is based on the IEEE 802.16 standard (also called Broadband Wireless Access). The name "WiMAX" was created by the WiMAX Forum, which was formed in June 2001 to promote conformity and interoperability of the standard. The forum describes WiMAX as "a standards-based technology enabling the delivery of last mile wireless broadband access as an alternative to cable and DSL".

In the first session yesterday, I might give the members in my table the incorrect number about the transmission rate of 2G, 3G and 3.5G so I searched and organized some information from the internet. The following is a brief introduction for your reference.

4G (ex. Wi-Max, LTE): 70Mbps ~ 100Mbps, the cost of the chipset is still a little high so 4G is not very popular yet (currently, 4G are usually only supported in laptop rather than mobile phone) but it will become more and more popular very soon.

Please correct me if any statement I might be wrong.

Mega-pixels used to be the way to tell how good a camera is.
The new and better determining factor is "sensor-size".
http://en.wikipedia.org/wiki/Image_sensor_format.

The word "cellphone" is slowly fading away.
They just sound too old fashioned.
It is more common to hear "smart phone" or "mobile-devices"

Not sure if this has been posted before.
Funny how fast the world had evolved.

I am not abandoning Yoyo, I am just dancing slowly away from it.
回頂端

Hahah~~ the video is interesting!

and it's new to me.
I bet some yoyoers have got their i-phone already. And I happened to know Lynn is using it happily even though the OS is in a close structure and the battary is fixed inside the body. To me, the price of iphone is still a bit too high to own one, and still I am having good time with my Asus PDA phone.

Thanks for the update!

I can't figure why I wrote
家用電話：domestic telephone.

Even though "domestic phone" can be found on the Internet, I think that the speaker tried to say "home phone" (to be differentiated from "office phone") or "household phone" (to be distinguished from "public phone").
Knowledge is power -- when shared.
回頂端

It's great to see your writing again, Wayne!
I guess when you did the search on our forum for the question I asked you earlier today and you found this one, right?

This reminds us how rich our forum database is! Unfortunately, it is hard to do effective search under the old technology of the website.

Anyway, thanks for updating the information. My wishful thinking is to see you return to be our language advisor again soon, but I certainly know how your work goes. So, take care and at least we get to chat more tomorrow during the hiking, right?