Hello, everyone. It’s me again, Robert! Tonight we are going to discuss the movie that I believe everyone must have seen—“the Blind Side.” If you haven’t seen it, you can also join our discussion. Use your imagination and tell us what you think about the movie. After all, we are here mainly to practice English. Just relax and enjoy the moments of talking in English!

Plot
"The Blind Side" depicts the story of Michael Oher, a homeless African-American youngster from a broken home, taken in by the Touhys, a well-to-do white family who help him fulfill his potential. At the same time, Oher's presence in the Touhys' lives leads them to some insightful self-discoveries of their own. Living in his new environment, the teen faces a completely different set of challenges to overcome. As a football player and student, Oher works hard and, with the help of his coaches and adopted family, becomes an All-American offensive left tackle.

Review
When the story carries the ball
By Ann Hornaday
Friday, Nov. 20, 2009

There's been something off-putting about the ad campaign for "The Blind Side," a drama about a white woman who adopts an African American high school student, from trailers trafficking in nearly every troubling African American stereotype in movies (from the Magical Negro to the surly low-level bureaucrat), to posters featuring the patronizing image of Sandra Bullock gently leading her looming, gentle giant of a son down a football field.

It turns out that "The Blind Side" is much better than its ads, largely because it's based on the true story of Michael Oher and Leigh Anne Tuohy. Grounded in the direct, disarming truth of their experience, the movie has a straightforward lack of cheap sentiment that saves it from being either too maudlin or saccharine-sweet. Bullock, making a comic-dramatic play for "Erin Brockovich" territory, is perfectly suited to play the tart, no-nonsense Leigh Anne, who, when she sees Oher (Quinton Aaron) walking alone on a cold, rainy Memphis night, spontaneously invites him to stay with her family.

What ensues is the kind of entertaining uplift Hollywood does best, its dramatic elements leavened by frequent moments of comedy (mostly at the hands of Leigh Anne's precocious youngest son, played by Jae Head) and stirring sports sequences. If viewers may experience a twinge of misgiving about the issues of race and class that are elided in "The Blind Side," they can't help but be enormously entertained and moved by its irresistible story. Especially in the film's soaring, triumphant final moments, viewers get the sense that this isn't a story about race or redemption or the complexities of class and culture. It's a story about the authentic, compassionate response to vulnerability and need. It's a story about family.

Questions for Session One:
1. Why is the movie entitled as “the Blind Side”? Is Chinese translation “攻其不備” right for the English one?
2. If you were Leigh Anne Tuohy (Sandra Bullock), would you take in a stranger like Michael Oher?
3. What are the most touching parts of the movie for you?

Questions for Session Two:
4. In this movie, the Tuohys, the white family, open their arms to Michael Oher, a black man. Do you consider racial discrimination a serious issue in American society?
5. Have you ever met with racial discrimination in other countries while traveling?
6. In your life, have you met anyone that gave you a helping hand and had changed your life since then?

I myself have been curious about the Chinese title, 攻其不備, as well. I tried to recall the storyline but couldn't figure out any cues implying this Chinese title. I searched the internet and found this puzzle trapped some of its audiences too,
http://www.mobile01.com/topicdetail.php ... 440406&p=5
FYI.

Since I am not a (an American) football fan, either can I defense the justification of this Chinese title, however, if we have to vote, probably I may vote No.
The real peace is not merely the absence of warfare, but the presence of justice
回頂端

Besides being a story with American football as the background, the word "blind" in "blind side" also refers to how the story-plot transcends racial boundary. The football part of the story is actually just a sideshow. This movie/title serves as a reminder that in a pluralistic society, how we often choose to ignore or turn a blind-eye on those groups of people with background that differs from us. Unfortunately, there is no racial connotation in the phrase "攻其不備"

http://www.phrases.org.uk/meanings/turn ... d-eye.html
I am not abandoning Yoyo, I am just dancing slowly away from it.
回頂端

Dear All participants of today's meeting


I mentinoned in the meeting that "blindside" is actually a verb. For your information as below

blindside [transitive] American English informal
1 to hit the side of a vehicle with your vehicle in an accident: Their car was blindsided by a bus at the intersection.
2 to give someone an unpleasant surprise: I was blindsided by his suggestion.

BTW, I'm not sure if I read it right or it's the translation issue, I don't consider "種族隔離" is an accurate term expressed here. I'm not sure if the author was using "segregation" to describe the phenomenon. The process he described is more like "聚落形成" than "種族隔離" (The same rule may apply to the manufacturing chains in industry as well). People in Chi-shan and Mei-long are still hanging out with each other. There is no segregation among them.

We had discussed prejudice before. This process could be inevitable among people unless education/rationality finally prevails.
The real peace is not merely the absence of warfare, but the presence of justice
回頂端

BTW, I'm not sure if I read it right or it's the translation issue, I don't consider "種族隔離" is an accurate term expressed here. I'm not sure if the author was using "segregation" to describe the phenomenon. The process he described is more like "聚落形成" than "種族隔離" (The same rule may apply to the manufacturing chains in industry as well). People in Chi-shan and Mei-long are still hanging out with each other. There is no segregation among them.

We had discussed prejudice before. This process could be inevitable among people unless education/rationality finally prevails.

I checked the original paper published by Thomas Schelling. He used "segregation" this word.

Evidently color is correlated with income, and income with residence; so even if residential choices were color-blind and unconstrained by organized discrimination, whites and blacks would not be randomly distributed among residences.

This is not to claim that the organized discrimination or the economically induced segregation is less powerful, or less important, or less a matter of social concern, than the segregation that results from individual action. Indeed, aside from the question of which mechanism may account for the greater part of observed separation by color, the organized segregation involves civil rights; and the economically determined segregation raises questions of social equity. On those grounds alone the subject of this paper might be put in third place. Still, in a matter as important on in the United States, even third place deserves attention.

Thanks for the information, I have downloaded the thesis and will find sometime to finish it.

Thanks for attending the meeting last night and thanks for Robert's hosting as well. 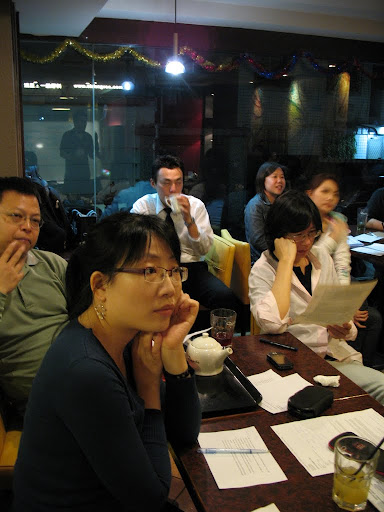 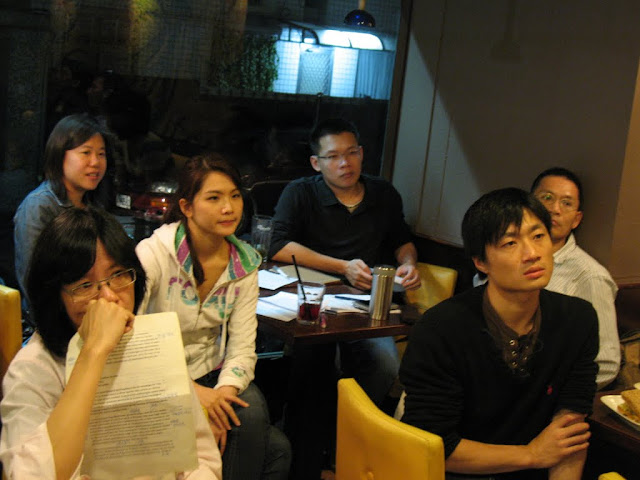 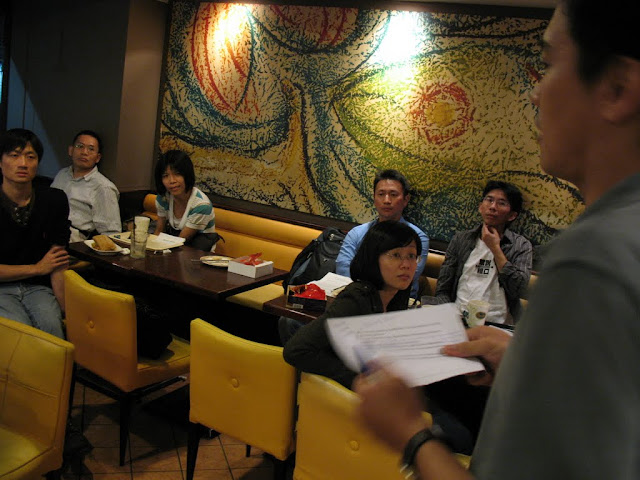 The real peace is not merely the absence of warfare, but the presence of justice
回頂端

The following are the words we discussed this Monday:

Thank you for your discussion and information offered by Wenhan, Technobabel, Michael, and Toshi.

Have a wonderful weekend!