Learning from its failed experience in the U.S., the Wowprime Group is now turning to partnerships to extend its steak empire in Taiwan to Southeast Asia.

Taoban New Style Japanese Cuisine, one of the leading brands of Taiwan's biggest restaurant group, Wowprime Corp., will make the group's first foray into Southeast Asia next year when it opens a restaurant in Bangkok.

That day will come a decade before Wowprime Chairman Steve Day had originally planned, but Day will at least have his company's failed move into the United States market as a guide. One of the lessons learned: minimize risk by staying small. Wowprime will hold only a 30 percent stake in the new Bangkok establishment.

In 2000, Day's flagship high-end Wang Steak brand had reached its ceiling in Taiwan. Expansion was at a standstill, and because of Taiwan's slumping economy at the time, sales fell 24 percent. To generate growth, Wowprime unfurled a two-pronged strategy: launching a campaign to develop new brands domestically and expanding into the U.S. market.

"If the reaction in the United States were good, there would be no need to consider other countries in the following 10 years. Concentrating on the U.S. market would be enough," Day dreamed at the time.

In Taiwan, the company's branding campaign generated new brands with distinct styles covering specific niches, such as the mid-market steak house Tasty Steak, Taoban, and the higher-end Gi Hokkaido Kelp Hot Pot. But in the U.S., Wang Steak tasted failure, only opening one restaurant, the Porterhouse Bistro in Beverly Hills, over five and a half years.

Wen Chao-Tung, a professor in National Chengchi University's Graduate Institute of Technology and Innovation Management, observes that the service sector in the U.S. is more mature than in Taiwan, "so even if Wang Steak had a good reputation in Taiwan, it was only average in the U.S." The restaurant ended up being sold at a loss of NT$120 million.

Lesson one: Competition in the restaurant business comes down to culture. In expanding abroad, one needs a relative advantage in terms of culture.

"I believe Southeast Asia is our best market," Day says, because Taiwan's level of development surpasses that of Southeast Asia, just as Japan's surpasses Taiwan's. "When choosing a brand, local agents normally opt for one reflecting a culture more refined than their own. Chinese restaurant brands have failed in Taiwan because their culture is not up to ours."

Lesson two: When moving into somebody else's territory, only by "grafting" a new plant can flowers thrive everywhere.

"The only way every brand can gain a foothold in every country or every city is by relying on somebody else," Day says. "I had always believed that you had to do things yourself when expanding abroad, soliciting outside investors for at most a 20-30 percent stake in the business. But now it's the reverse. I have partners take a 70-90 percent stake. That way, as soon as our strategy changes, I don't have to be limited to one country. If I was doing everything on my own, I would have to build a brand in one place for eight years before daring to start up in a second location."

In his reliance on "grafting" to blossom in an already established foreign territory, Day has one simple condition in selecting a partner: the company must rank in the top three in the sector in the country. "They understand the local market. If they choose our brand, I will authorize them to represent it and will provide education and training support and give them an IT system. They will work very hard because if by chance the business loses money, they will lose the lion's share while I lose a smaller amount."

But if a potential partner in a foreign market is already in the top three in their industry, why bother working with Wowprime? "First, all the chains in Southeast Asia sell fast food. There are very few real restaurants that have experience running a chain. Second, Wowprime's training program, management system and purchasing model are the best of their kind in Asia. Nobody else has been able to reach our size or proficiency."

The world's largest restaurant group outside of the fast food sector is Ruth's Hospitality Group Inc., best known for its Ruth's Chris Steak House. The group had revenues of about NT$13.4 billion in 2008, less than twice that of Wowprime.

Leveraging its impressive size, Wowprime relies on purchasing advantages and cash discounts to keep its food materials as a percentage of overall costs 20-40 percent lower than its competitors. It is already the largest importer of beef in Taiwan, and, with the help of cash discounts, its cost of goods is at least 10 percent below that of its main rivals.

"That's the threshold for entry. If you do not buy the best, in big quantities and cheaply, you're finished if you get involved in this business," Day says. By making joint purchases with Wowprime and having their orders delivered separately, the company's Southeast Asian partners immediately save at least 10 percent on their beef purchases.

Also, Wowprime does not exclude second floor or basement locations in choosing store sites, lowering the group's rental costs as a percentage of total costs to half that of other restaurant chains.

"For essentially the same thing that Japanese restaurants might sell for up to US$40, we sell for US$20. Other Taiwanese rivals cannot compete with our prices either, so their only option is to run short-term promotions. But our prices have been like this for a long time. That's one of our key strengths," Day says.

"Our systematic training is what sets us apart, and it represents a high threshold that we have built up," Day says.

Eleven years ago, when the group's executive director of training, Samson Chang, joined the company from McDonald's, Wang Steak had only two employee manuals: one on cleaning procedures and the other on customer service.

"They were really thin, only a little over 10 pages. When I saw them, I thought to myself, ‘how can this be enough?'" Chang recalls.

So he introduced McDonald's standard operating procedures to the group, and today Wowprime has more than 40 manuals on operating procedures. The thickest, over 200 pages long, covers even the most minor details, from telling employees that "earrings cannot extend beyond one's ear" to instructing waiters when serving food to "lift the plate cover in the direction of the customer 45 degrees and hold it there for one second before taking it away to let the customer enjoy the smell of the food and create a sense of curiosity and anticipation."

Also, these 40 manuals are also used as the core of 70 annual classes held internally. Promotions are determined entirely on one's scores and attendance in the classes.

Holding on to Talent

The base salary of Wowprime restaurant employees is at least 20 percent higher than their peers in the industry, but 70 percent of their pay comes from the company's generous profit-sharing plan. Twenty-one percent of the monthly profits of each group brand (which operate financially as independent entities) are distributed to their respective employees, and at the end of the year, those same employees share 50 percent of their brand's net profits.

This pushes the compensation of Wowprime restaurant employees to nearly double that of their peers. Kuo Yu-yu, a 28-year-old who started with the company six years ago as an hourly worker and has now become a supervisor, earns nearly NT$700,000 a year.

Day only holds 20 percent of Wowprime's equity. The rest is distributed to his managers. "There isn't anything I won't do to hold on to talented people," he says.

Aside from Taoban opening a branch in Bangkok next year, discussions are also underway to extend the brand to Singapore, Malaysia and Indonesia.

"The Southeast Asia restaurant market is about four times the size of Taiwan's," Day says. If the strategy of "grafting" new partnerships succeeds, combined with rapid expansion in China and opening smaller stores in second- and third-tier cities in Taiwan, Wowprime sales could break NT$10 billion in 2011 and it could accomplish its goal of going public in 2012.

Wowprime failed in transplanting its Taiwan model in the United States. It has been successful in China but is finding that employees there are not of the caliber of their Taiwanese counterparts, making it impossible to precisely recreate the corporate culture and profit-sharing system that exists in Taiwan. If Day's dream of building an international brand is to come true, he will have to succeed beginning next year in Southeast Asia, perhaps his last opportunity for internationals expansion. 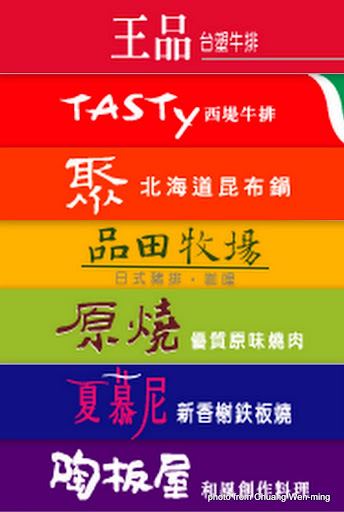 Section II
Q4: Which mottos from Mr. Dai do inspire you? Why? Any stories?
Q5: In your point of view, what are Wowprime Group’s “KSF (Key Successful Factors，關鍵成功因素)? Wrap-up in your group.

Did you choose this topic because of your name?

Yeah, I also want to know why you choose beef to be your name, why not pork, chicken, lobster, duck, lamb?

Sorry If my question is too offensive.

Did you choose this topic because of your name?

People may ask "where's the beef?"...
In Wed. meeting you might answered " here is the beef! "

Ha, this topic is interesting. There's much information to learn.
I will be there
回頂端

During the discussion, we talked about “how we like our steak to be cooked”, and we couldn’t think of the one between “medium” and “well-down”. Here it is:

Thank you for telling me to use “knock over” to describe “打翻水杯”. The phrase I mentioned that I had learned but slipped my mind is this one:

And here is an example:

It reminds me that I tipped a pot over when I was cooking breakfast the other day, and the hot water spilled on my foot. When I told others “I burnt my foot with boiling water”, someone told me that I could just say “I scalded my foot”. They have the same meaning, but the later one is briefer. Just let you know.
回頂端
回覆文章
8 篇文章 • 第 1 頁 (共 1 頁)