Session1
The article for discussion: (文化挪用)

an American teenager wore a traditional Chinese dress to her prom(畢業舞會). The young lady, is not ethnically Chinese or Asian. And this infuriated a lot of people on Twitter. Someone responded to her pictures by tweeting, “My culture is NOT your goddamn prom dress.” 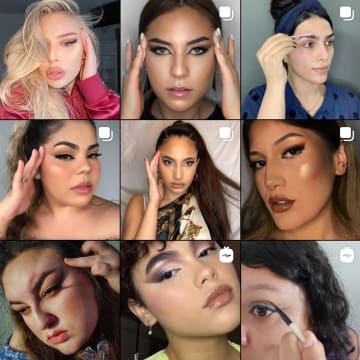 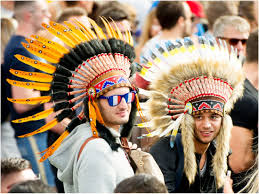 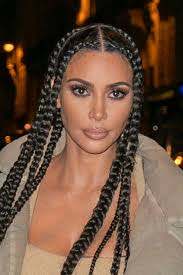 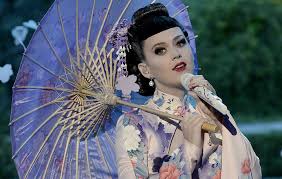 1. As a Chinese, are you offended by the 旗袍 photo above? How about the "fox eye" photo? "Fox eye" is typically known as a physical feature of Chinese. Hollywood actress 劉玉玲 and 胡志強's daughter 胡婷婷 have typical fox eyes. Do you agree that the "fox eye" beauty trend in western countries is racist or stereotyping?

If you were a Native American, a black, or a Japanese, would you feel the above photos are disrespectful to your culture?

2. What is the difference between "cultural appropriation" and "cultural appreciation"?
"Appropriation is simply taking one aspect of a culture that is not your own and using it for your own personal interest" (such as for fashion or for fun) Do you agree?

So, is the criticism of cultural appropriation a nonsense?

Cultural Appropriation is related to "White Supremacy". What is white supremacy?

White supremacy or white supremacism is the belief that white people are superior to those of other races and thus should dominate them. White supremacy has roots in the now-discredited doctrine of scientific racism and often relies on pseudoscientific arguments, and was a key justification for colonialism. It underlies a spectrum of contemporary movements including neo-Confederates and neo-Nazism.

There is an open letter on Facebook by a Malaysian man to Chinese people that has gone viral. It goes like this:

I’m from Malaysia. China has traded with Malaysia for 2000 years. In those years, they had been the world’s biggest powers many times. Never once they sent troops to take our land. Admiral Zhenghe(鄭和) came to Malacca(馬六甲) five times, in gigantic fleets, and a flagship eight times the size of Christopher Columbus’ flagship, Santa Maria. He could have seized Malacca easily, but he did not.

In 1511, the Portuguese came. In 1642, the Dutch came. In the 18th century the British came. We were colonised by each, one after another.

When China wanted spices from India, they traded with the Indians. When they wanted gems, they traded with the Persian. They didn’t take lands. The only time China expanded beyond their current borders was in Yuan Dynasty, when Genghis and his descendants Ogedei Khan, Guyuk Khan & Kublai Khan conquered China, Mid Asia and Eastern Europe. But Yuan Dynasty, although being based in China, was a part of the Mongolian Empire.
。
。
(The rest is omitted)

The complete letter with Chinese translation is here:
https://baiyunju.cc/6009

The tributary system of China (朝貢制度) was a network of loose international relations focused on China which facilitated trade and foreign relations by acknowledging China's predominant role in East Asia. It involved multiple relationships of trade, military force, diplomacy and ritual. The other nations had to send a tributary envoy to China on schedule, who would kowtow(磕頭) to the Chinese emperor as a form of tribute, and acknowledge his superiority and precedence.

1. Is the tributary system of China similar to the mindset of white supremacy? Is there any difference? Can we call it "China Supremacy"?

2. As the above letter points out, Zhenghe's ship was much bigger and more powerful than the one of Christopher Columbus. Why didn't Zhenghe take the land of foreign nations? Is it because Chinese is a peace-loving race? Can you think of other possible reasons?

3. Generally speaking, Indian, Chinese, Japanese, Korean are better in mathematics than white people. Should we Asians feel intellectually superior to white people? If you only feel superior to them inside and do not do any harm to them, is it still morally wrong?
最後由 Michael-liu 於 週二 9月 15, 2020 11:08 pm 編輯，總共編輯了 61 次。
回頂端

This term reminds me of the news in circulation on the internet many years ago which stated that Korean claim that Confucius is Korean. My peers and me were laughing, jeering at this news and made fun of it quite often. Before long, another statement also came up that Korean invented everything or Korean will profess to have the ownership of whatever they find glamorous. This perception was cemented firmly even to the point that we'd label those copycats as Korean. However, I couldn't really pinpoint any news now regarding this declaration by Korean in google. Chance is that it might be just a snippet of fake news which prevailed at the time when the general public was oblivious to the credibility of online news. But whether or not there was really a Korean historian making this assertion, we did feel bummed out upon hearing it because no one'd want his culture to be stolen and used for the sake of money or popularity. The video below,even though its title doesn't seem related, encapsulates three subcategories regarding cultural appropriation and it might be a good entry point for anyone who's interested in this topic.

The youtube video you posted fits this topic very well, so I took the liberty of using it without asking you first. I hope you don't mind.

We have many Thai food restaurants in Taiwan, so they use Thai cuisine to make "money". ( and we Chinese culture may be more dominant than Thai culture). We feel totally fine with these restaurants, maybe because there is no any "disrespect" in it.
But I don't know whether Thai people are offended by it. We need to ask them.

As for "populality" ( such as fashion) and also for "fun"( such as Halloween party), this is the key issue I would like people to discuss in the meeting.
回頂端

good~ it's a hot topic again, sort of a topic of debate. i like it, and i got to say i don't really agree with it, since i'm a cynic haa~

https://greenheart.org/blog/greenheart- ... -ipRwIU_p8
i might be a cynic and, a sceptic as well but, i'm definitely not a bad person!!
回頂端

I do not feel offended by that western girl donning a cheongsam. I don't think cheongsam is being culturally appropriate. There is no evidence of a mockery of the Chinese culture. It seems that the incident has not touched off a storm of protest for cultural appropriation. It is a celebration of the culture by someone who is non-Chinese, and I appreciate her support for the beauty of cheongsam. Also, she looks stunning in her attire. Living in a global village, we should embrace the fact that cultural exchange is a good thing.

I find “cultural appropriation “a baffling term. As we know, we can claim patent, copyright, and trademark for the legitimacy of the ownership of a product, but the possession right of culture? I am sure that there are controversial examples where cultural appropriation occur, but the vast majority of them are just pointless! To understand the difference between acts of appreciation and acts of disrespect is not a tough nut to crack, but can be very subjective. People can generally tell someone is crossing the line of cultural disrespect. We can always voice our opinion when it goes beyond the pale. To me, stereotyping culture is worse than cultural appropriation.

Truth is hidden in plain sight when it comes to the relationship of being deep-rooted between the superior and the inferior. Namely, white supremacy, racism, imperialism, colonialism, and tributary system, etc., whose concept ties to the notion of inequality and gets displayed in a social, political, or global hierarchy to its counterpart. For all Taiwanese, we have long paid the relatively high cost on some obsolete or unnecessary arms, and soon to lift a ban on importing US pork containing residual ractopamine. I dare to pinpoint those reluctant policies to somewhat fit into a modern tributary system. Hopefully, the tributes we have paid to the US can bag what we desire and keep a physical war at bay!
回頂端

Luis, the point of this article you shared is that we need to be very careful when we share or make use of other cultures.

So, I am not sure what part you "don't really agree with it". Could you elaborate on it? Thanks
回頂端

Here i find another article that I sort of agree,

but only the first part of it haa~

Ok, that's probably about that. Writing in English is tiring, guess I can't elaborate any more. And guess I got really lazy lately, or mature? I don't think I have to explain more either. Actually I don't even know how to explain my ideas sometimes when I feel something is just not right so, if people can't understand my points, so be it. What I only can say is, I'm cynical and sceptical, and my English sucks haa~

i might be a cynic and, a sceptic as well but, i'm definitely not a bad person!!
回頂端

Why didn’t China colonize the world in Ming Dynasty? This interesting question has long been asked by history enthusiasts. I am embarrassed as I can only vaguely recall the history of Ming Dynasty that we studied in college. A well-known fact, Ming Dynasty was the world superpower in the early 16th Century. It is said that if Ming Dynasty would had exercised the colonialism, the world would be all speaking Chinese now.

Many researchers pointed out that in early Ming Dynasty, China was a natural resource, agriculture, and crafting work abundant county. From culture to physical products, China were way too superior to any others in the world at that time. The pride of supremacy and traditional bureaucratic feudal system prevented the centralized government from searching outwards for land and sovereignty expansion.

In addition, Ming Dynasty, though took power from the Mongol-led Yuan Dynasty, had never stopped facing the threat from Mongols throughout its entire history. Many historians indicated that one of the main reasons Ming government did not support Zheng He’s voyages overseas prestige mission is because they had to fortify the northern boundary against Mongol military threats. That consumed most of the Dynasty’s energy.
回頂端

Cultural appropriation is a topic that I have a hard time getting my head around. Living in a global village where countries are getting more mutually tied to one another, we are seeing more frequent adoptions of elements from other cultures, be the culture non-dominant or otherwise. That is just the nature of the beast. After reading cases of cultural appropriation from the article and the video, I am actually quite confused by the line dividing cultural appreciation and cultural appropriation. There seems to have plenty of shades of grey between being benign and offensive, and judgements are always highly subjective.

He said that why ancient powerful Chinese empire did not colonize other nations is not the question we should ask, because Indian culture is also like Chinese culture, which is peace-loving and treats guests with hospitality.

Ramesh said the very question we should ask is why Europeans colonized other nations. I replied his question with gut feeling, saying that "because they are animals! they are barbarians!". Then some people accused me of racist.

I was sort of joking, of course. After some serious thoughts, I think maybe the reason is, other than to get resources, in western culture, they value " conquering". They love to conquer.

I may study more about this question and use it as a hosting topic next time.