In below news, should we use "would" instead of "will" because the reporting verb is past tense?


Announcing details of the itinerary on Friday, the UK government disclosed that Trump will attend a black-tie dinner hosted by Prime Minister Theresa May at Blenheim Palace, the birthplace of the UK's celebrated wartime leader. He will hold talks with May at her country retreat, and spend a night at the residence of the US ambassador in London. https://edition.cnn.com/2018/07/06/uk/t ... index.html
回頂端

It’s true that “verb tense consistency” is one general principle, but there is also the “reported speech” rule that applies here.

According to English Grammar By Oxford University Press:

"The original present <or future> may be retained if the content still applies at the time of the reporting situation." (The future tense is addressed in other paragraphs, but follows the same rule.)

“Zox said to me recently that he doesn’t think there’s going to be a rehearsal for the wedding.”

The tenses have shifted twice! So all three tenses are there in the sentence.

Why? Let’s say Zox said this to me and I’m reporting this to you now. Zox siad (recently, so I use past tense) that he doesn’t think (he hasn’t told me otherwise, so I can only assume that he still thinks the same way. I use present tense) there’s going to be a rehearsal for the wedding (at this moment I still don’t know if there will be a rehearsal, so Zox's doubt can still be proven true. I use future tense.)

Verbs often used in reported or indirect speech include: say, think, feel, know, tell, etc. And many journalistic terms such as the “disclose” in the CNN piece.

There’s a trend toward giving free indirect speech a more natural sounding and immediacy by not backshifting (changing of a present tense to a past tense following a past form of a reporting verb.) So my guess is that we’ll see more “will” then “would” in this kind of reporting. Plus the more "current" meaning implied in the relaxed rule can reduce confusion. See the comic below for the joke! 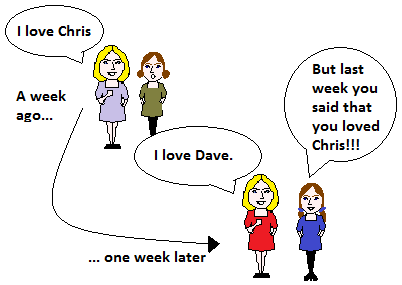 I also posted this question on an English learning website and got the following formal reply:

No, it is not grammatically incorrect.

Because Trump has not yet attended the event, any disclosure prior that the event should use the past + future tense. A news report on a developing story would use this combination.

You are right that it is possible to use "would attend." However, that usage of the past + past conditional would only be appropriate after both the disclosure and the event occured. A history book about the Trump presidency would use this combination.

The difference between the two usages you've identified results from whether just one event has occured or whether both have occured.
回頂端
回覆文章
3 篇文章 • 第 1 頁 (共 1 頁)